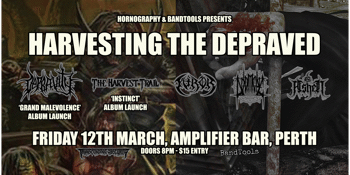 This extreme metal assault has been destroying Perth stages and making a huge impact worldwide, now DEPRAVITY present their second alum GRAND MALEVOLENCE to the masses! Those who have been to a DEPRAVITY show and lived to tell the tale, will know this is one seriously crushing live act not to be missed.

“Among the titans of death metal!” – Metal Obsession

“A blood thirsty, pummelling affair from start to finish” - AMNplify

Taking inspiration from 90s melodeath but doing it faster and angrier than ever before, THE HARVEST TRAIL will be launching their debut album, INSTINCT! Intertwined with themes of Aussie true crime tales, THE HARVEST TRAIL portray a terrifying rampage packed with non-stop riffs and energetic aggression.

This once solo studio project is now coming to life with a full band live show! DOOMCAVE is a brooding and atmospheric style of black metal that is epic and will undoubtably translate excellently for the stage.

One of Perth’s all-time standout extreme metal acts in THE FUROR has returned as a one-piece destruction machine! Drummer/Vocalist Louis Rando has recently picked up the bullet belts and corpse paint again and gone solo, ripping through FUROR tracks old and new with utter jaw-dropping intensity. There has never been a stronger opening act to a local metal show, so be here early to catch this unmissable show in it’s current form while it lasts!